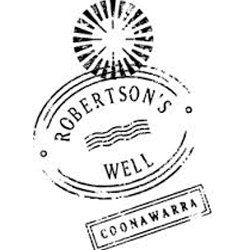 John “Poor Man” Robertson arrived from Scotland in the 1830s and, with a typical sense of Australian humor, gained his nickname after accumulating considerable wealth. At his peak, Robertson ran more than 60,000 sheep on some of the best grazing land. The wine is a tribute to the regional pioneer Robertson and named after a large well sunk into his property in the 1840s.

Robertson’s Well wines are sourced from the Coonawarra and show all the hallmarks of this region.