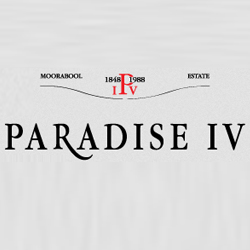 Paradise IV Winery has a long and proud history dating back to 1848, when James Henry Dardel first established his Paradise Winery, a collection of four vineyards on the banks of the Moorabool River in the Moorabool Valley.

In 1988 planting at Moorabool Estate was re-established on the site of the original Paradise IV Vineyard by Graham and Ruth Bonney.

Doug Neal discovered Moorabool Estate in 2006 and from that time, a partnership was formed with Doug as their winemaker to produce wines under the Paradise IV label.

With a seemingly unique terroir, Graham’s untiring work and vigilance as viticulturist and Doug’s dedication and passion as winemaker, Paradise IV wines are highly regarded and sought after locally, interstate and overseas. Their Chardonnay is quickly building a reputation as one of the best, and most interesting in Australia.